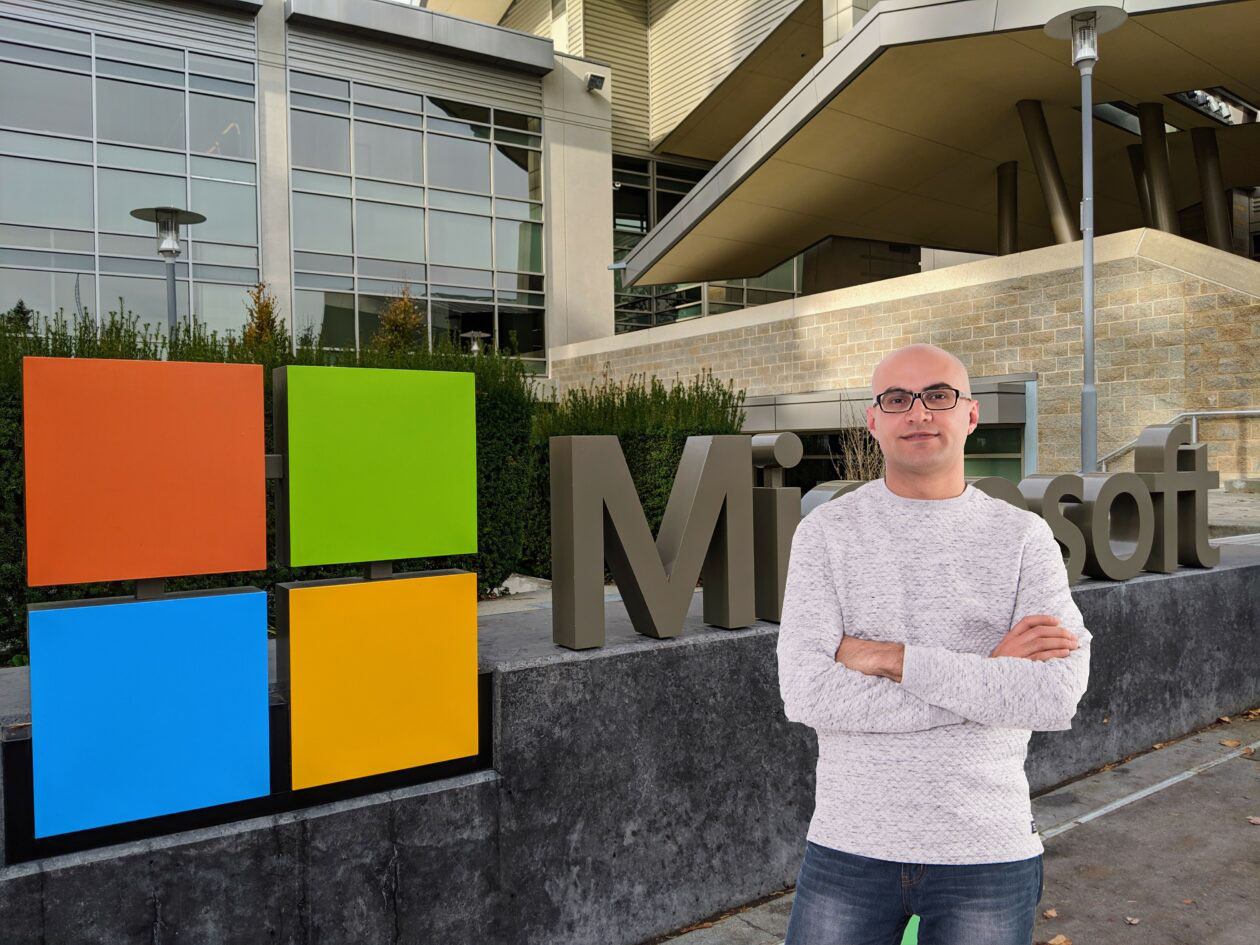 The cat is out of the bag now, I’ve joined Microsoft as an Azure Technical Trainer. Some of you might be wondering why, and if so, this post is for you. I’ve decided to write down why I’ve made this decision and a bit about my 15+ years journey from high school to where I am now.

PS: We don’t have a Microsoft campus in Melbourne, but it didn’t prevent me photoshopping myself in 😜. Also, Satya Nadella was another motivation for me to join since we have a decent resemblance 😎.

I started to write small programs when my brother bought a PC back in 1998. It was running MS-DOS and the first program I wrote could print a pyramid with stars on the console and was written in QBasic. From then, I was always amazed by people who write programs which can help others write their own, and working at Microsoft became one of my dream jobs.

Later on, I progressed through high school, pre-uni and then uni when I started my journey as a software engineer. I’ve started with C++, Turbo Pascal, FoxPro, Delphi, ASP Classic, PHP, and many other languages and ended up with, and finally ASP.Net MVC.

Throughout those years I became really interested to web development and have been active in that area so far. Of course that wasn’t the only thing I picked up, I have written windows desktop apps with ASP.Net web forms and Java Spring, Java Card applets to work with HSM and physical security devices, ActiveX, and many more I can’t even remember, not because I didn’t like them, but because I was really into learning new things and there were too many out there.

I wasn’t born in a wealthy family, so I had work summers and other free times to earn enough to go through my studies for the rest of the year. And we don’t have big companies represented in Iran, so working for Microsoft was became a wish in my bucket list.

When I graduated from University with a Master’s degree in Information Security, I was hired by one of the well known software companies who were involved in banking industry. From there, I had jobs as software engineer, team lead and line manager and eventually I became the software engineering lead for one of the private banks’s PSP (payment service provider) company. But throughout all those years, I was on the lookout for an opportunity to migrate to another country and continue my professional career there.

We considered Canada, US, and a few countries in Europe, but ended up pinning Australia on the map because of a few different reasons which suited our lifestyle and goals. So we sold/gave away most of our household items, rented out the apartment and packed our suitcases, jumped on a plane and ended up in Melbourne, Australia in 2015. I don’t want to go through how we got the Skilled Visa because it’s simply too long and brings back many not so good memories.

I immediately started applying for jobs here and without surprise, I was getting many calls, but not an actual opportunity that I liked. After one week, I had to bring down my expectations and start from scratch. I applied for a mid-level developer at a company and got in. This was after 3 weeks from our arrival and believe it or not is a record time for migrants to get a job.

Moving into consulting and public speaking

I didn’t stay there for long, as I didn’t want to waste any time following my goals. So I got into a consulting firm and eventually joined Readify (one of the best consulting firms in Australia) back in 2016. Because of my love for knowledge sharing, I got into public speaking starting from local meetups ended up at international conferences around the world. I am super proud of what I’ve achieved throughout these years and owe a big part to Readify and later on Telstra Purple. However, I still had my bucket list getting dust and wasn’t enjoying what I was doing as my full time job.

Decision to shift to developer advocacy

I was doing conference talks, blogs, and was involved in development community which has been a real pleasure, but managing all of that while having a full time job was really tough. So I started to search for similar roles and came across developer advocacy. However, this not a role which is very well known in Australia apart from big companies like Microsoft, Amazon AWS, IBM etc and some smaller ones like Auth0 and Twilio. I had a few discussions with different people to get an idea of what’s required to be able to score one of those jobs, but didn’t get a chance to find and apply for one.

When an opportunity presents itself

So I continued what I was doing, but still were on the lookout for something interesting which could help me do what I love to do. A few weeks back one of my friends who also works at Microsoft told me about a position on the Azure Technical Training team and I thought that’s something I would be really good at. It would be a bit of shift from web development, but the pros (working at Microsoft, sharing knowledge, and being close to what I love to do) convinced me to apply. I went through the interview and got an offer which made my year. This year has been really tough for me and my family and this event really helped us recover from these last few months of stress and anxiety.

So here I am, employed by my dream company, and doing what I love to do. It couldn’t have ended up better than this, I’ve already talked to my manager and he knows and supports my passion to be involved in development community, so this doesn’t mean I won’t be active on conferences and blog posts anymore. This amazing opportunity will help me grow in many ways as working at Microsoft and working with so many talented and amazing people would.

I just hope this has inspired a few of you fellow developers out there to never give up hope and follow your dreams however distant and impossible they seem 🤘🏽 💪🏽.